For saturday i accepted Kim's invitation to see some places of interest i missed last year. Mount Seymour, Steveston és White Rock in the order of visit. The sky - despite Geoff reported sunshine for the whole day - wasn't cleared by the morning, so we started our trip in a awful weather in her white sports car. It was rainging heavily. This shouldn't have been a problem to look down from Mount Seymour, but the cloud level was below the mouuntain so we didn't seen anything but fog. After this, we decided to give the weather (and Geoff) an other chance and headed south. 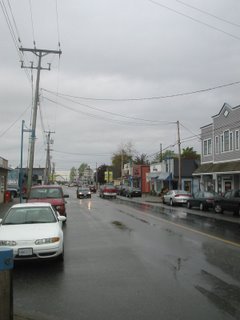 At the turn of the twentieth century, Steveston was the busiest fishing port in the world, with fifteen salmon canneries, six hotels, numerous saloons and gambling dens, and up to fourteen windjammers simultaneously loading canned salmon for world markets. In the heart of old Steveston Village is the Steveston Museum. 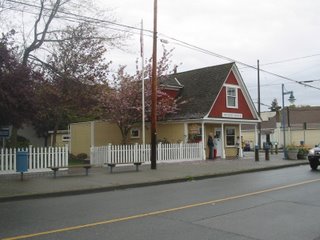 The place has nice houses and a dock, the whalewatching boats are starting from here as well. 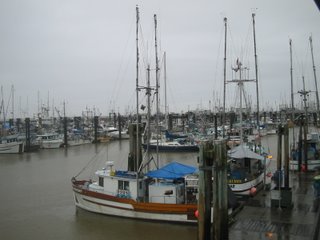 The museum presented the historical devices fairly authentic way, so i got a small wild-western walking around the small rooms :) We celebrated the lighter shower with a short walk, and got into a souvenir shop as well.
After leaving Stevenstone, we arrived to White Rock, and we got into a restaurant escaping from the rain. White Rock is a "holiday village" just next to the US border. It cleared a bit after lunch so we got to the pier. 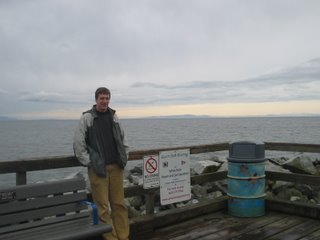 Getting back to the coast we got into a small house meant to be a museum, but it had only a small room showing a telegraph-station: 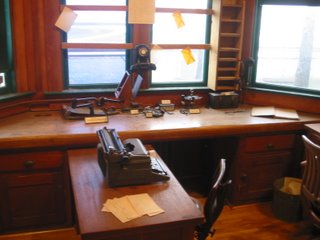 On the way home we entered the casino (this was the B-plan for the rain) - this was my first time in such a place, so with virgin-hands i didn't spend 25 bucks, rather left them with a 140CAD winning... good DEAL!
Nincsenek megjegyzések:

This week i coloured my weekday-evenings with live music events. We visited the Roxy Club on tuesday for the "CFOX Canadian Content Concert Series presents Damsel Fly with special guests". For the cover we got free pizza slices and an entry drink as well. THe first band was pretty good (Dasha), but Demsel Fly was playing louder and heavier than my receptors could stand that kind of rock music. After a couple of beers we walked across the street to Caprice with a 80-90' party which was fitting to our needs better. [...] We got home with the last-before Seabus.

For Thursday we accepted Morgan and Rob's invitation to the mexican restaurant 2 blocks from our appartment. I could try CHIMICHANGA finally, and drank Corona which is acceptable if you are sitting in a mexican restaurant. I liked the place and it was a lovely evening.

Friday, we started in Toby's Pub on Commercial, where Miss Jennifer Hershmann was singing the music was extended with a Chicken Quesadilla proven to be a good choice. Its worth to click on the link to get an idea how good Jennifer sings. FYI: She is wearing clothes behind the guitar... :)
Nincsenek megjegyzések:

Sunday 0700 AM. I wake up. Geting out from the bed! That happened only because the Sun Run is going to happen on this shiny sunday morning. The Sun Run is the sport event which makes the most people to do something really healthy. (I am afraid the Canucks games are getting more citizens excited, but especially not in these days... ) 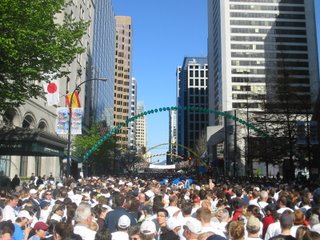 This year with record-beating 50746 registered runners, i took part in canadas biggest 10K run. Letting 50K people run in the same time in the same direction was successfully driven my Turkish troops in 1526 (yes, the hungarian "army" was running away) , but so far the world is more civilised (especially this corner) so we crossed the start-line in 2-3K batches, letting the faster runners first. I was waiting in a middle-rated group (white numbers) so 53 minutes after the start-shoot i crossed the start and was registered via my chip fastened to my shoe. By this time, the first fastest guy from Kenya had been waiting for the medal ceremony with a time 28:15 ... After passing the first kilometer, i stopped for taking photos several times, especially when i passed the bands playing along the route. Here are two of these bands 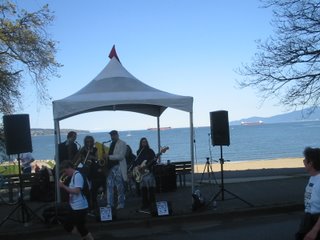 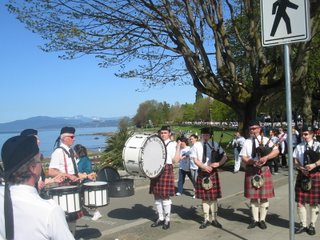 My result was around 66 minutes, which is not that bad taking into account that i biked 70K on saturday and missed a lot of training in the past 6 months...
Nincsenek megjegyzések: